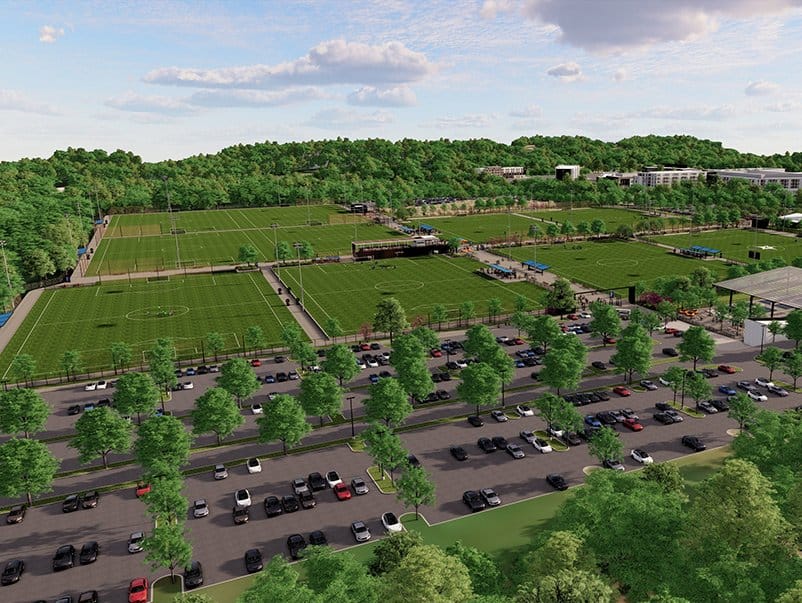 Paragon Star unveils their visionary work led by developers Flip Short and Bill Brown, president of Spectrum Strategies and Paragon’s coordinator. The development, which partners Brock USA, a leader in artificial turf components focused on athlete and environment safety, and Paragon Star Sports Complex, is a 10-field artificial turf complex slated to be completed later this year in Lee’s Summit, MO. The new project will be the area’s first sports complex with a shock pad and cooling organic infill; it was announced today at the United Soccer Coaches Convention.
“We are thrilled with the new partnership between Paragon Star and Brock,” said Paragon Star developer Flip Short. “Paragon Star will be the first sports complex in the county, of six or more long-fields, to have the Brock Shock Pad and the BrockFill™ on all its sports fields. It puts Paragon Star as first in class on a national level to focus on participant safety and environmentally sustainable practices.”
Each of the ten artificial turf fields will be designed with the Brock SP17XL shock pad, engineered to lower the critical safety impact ratings to a well-groom natural grass field. One of the most noticeable differences to the players, coaches, and referees will be the BrockFill™. Instead of crumb rubber, the turf will be filled with a 100% organic infill made of wood. The wood has the ability to absorb water, thus the ability to cool the turf by 20-50 degrees. On a 95-degree day, artificial turf fields with rubber infill can heat up to more than 160 degrees, causing significant safety concerns.
“The invention of BrockFill™ more than three years ago has opened doors for field owners to hold events at any time of the year or day and have the peace of mind that athlete safety is maximized,” said Brock CEO Dan Sawyer. “We are excited that the leaders at Paragon Star see the Brock Safety System as a way they can differentiate themselves from other complexes. There have been very few innovations in the last 20 years of turf that have more noticeable benefits to the athlete than BrockFill™. Fields are firmer, fields are cooler, and fields are safer. It’s a very compelling reason to choose Paragon Star when sports teams are scheduling tournaments.”
The other benefactor to the project is the environment. BrockFill™ is 100% organic thus will cause no harm to the environment once it is replaced; in fact, it helps the environment; an average field sequesters over 60 tons of CO2 from entering the atmosphere. A typical turf field built with crumb rubber will require at least 150 tons of rubber to be disposed of, often into landfills.
In addition to the ten all-weather soccer fields, the Paragon Star development will include luxury apartments, entertainment and dining, office space, lodging, and outdoor event space. The complex will be anchored by the premiere local soccer club, KC Scott Gallagher, and will be home to national soccer camps, league play, and tournaments.
For more information, get in touch with Jim Froslid, Central Region Vice President at Brock USA, 630-790-0260.