A Discussion of Rotational Resistance & Traction in Artificial Turf: Part 1 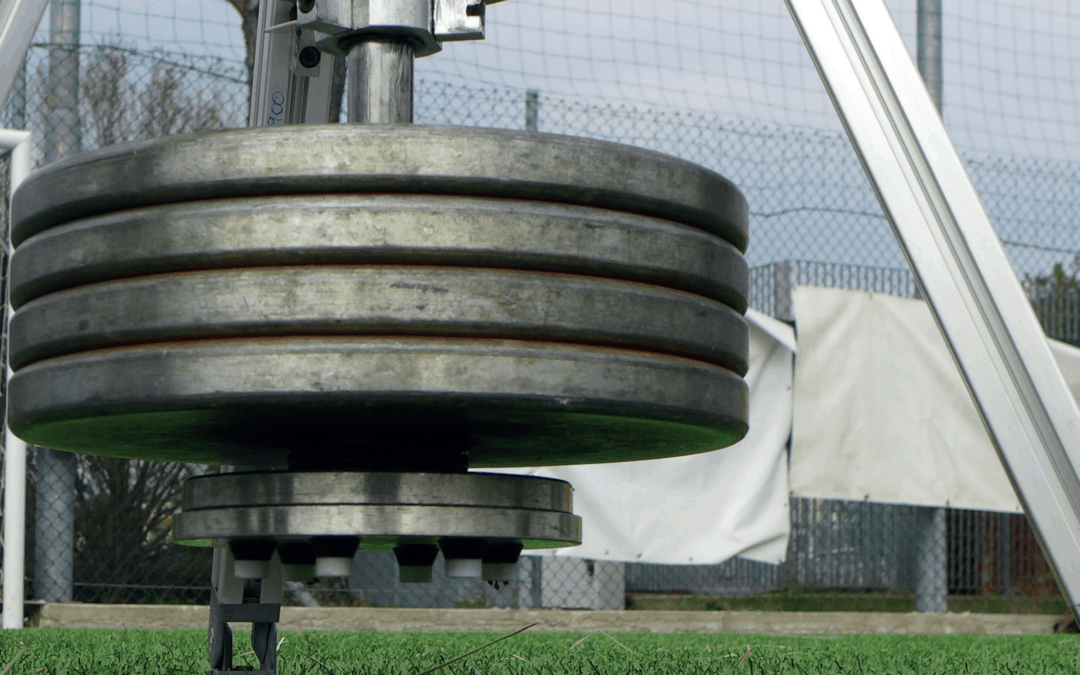 An in-depth look at the current testing method used to measure rotational resistance and traction, and how IT is failing to provide realistic simulations of athlete-to-surface interaction.

Stability, consistency, and adequate traction with appropriate cleat release are key characteristics of a playing surface that offers both safety and performance for the athlete. When an athlete plants a foot, pivots, jumps, lands, or runs, the characteristics of the playing surface upon which the movements are performed can influence the likelihood of a lower extremity injury, such as ankle sprains, ACL or PCL tears, and other soft tissue damage.

Recently published studies that analyzed NFL and NCAA football injury data over multiple seasons found higher rates of lower extremity injuries on artificial turf than on natural grass surfaces. Although natural turf remains the preferred surface for the vast majority of athletes, not all facilities can maintain a quality natural grass surface, especially when field usage is high. Thus, artificial turf has proliferated due to its ability to accommodate heavy usage, even when subjected to adverse weather and climatic conditions, and its reduced need for water, among other factors.

Resistance to the rotation of a cleated foot is a measure used to characterize how a surface will respond when an athlete plants a foot and pivots. Too much resistance to rotation can cause the foot to become “fixed” to the surface, allowing potentially injurious forces to be transmitted to connective tissue in the foot, ankle, and knee. This type of twisting motion is a common cause of lower extremity injuries. Too little resistance can cause the athlete to lose footing, causing slippage and limiting performance on the field. A good artificial turf surface, when coupled with the right footwear, should ideally provide enough traction to prevent the athlete from slipping, but not so much as to increase injury risk beyond that of a high-quality natural turf surface.

The test and equipment most commonly used to assess rotational resistance in sports turf have been standardized in BS EN 15301-1. A predecessor to the current device was originally developed in the 1970s for assessing traction on natural turf (originally, this was referred to as the “shear strength” of the turf/rootzone). 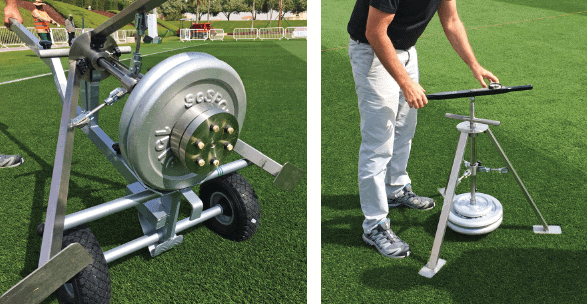 The current test involves the operator dropping a test foot – a 46 kg cleated metal disc – onto the surface from a height of 60 mm and then using a two-handled torque wrench attached to the top of the device to manually rotate the test foot through at least 45 degrees of rotation at a prescribed speed (12 rpm, or 72 degrees/second) without applying any additional downward force. The test foot is 150 mm in diameter and has six 13 mm plastic cleats located 46 mm from the center of the test foot and equally spaced in a circular pattern. Typically, five measurements are taken, and the average of the peak torques generated during each test is reported as the rotational resistance for the surface. The device has been referred to variously as the “torque wrench tester,” “rotational resistance tester”, “studded boot apparatus,” and “studded disc apparatus.

This test has been criticized for many reasons. First, it does not simulate a realistic athlete-to-surface interaction, as the loads and speeds associated with the test are not equivalent to the higher forces and speeds of a real athlete. Additionally, the cleat pattern on the test foot does not mimic that of an actual cleat an athlete would use. A critical review of sports surface assessment tests authored by Nigg nearly 30 years ago recognized and recommended that traction testing (both rotational and linear) should be done using forces that mimic the actual forces between the athlete and the surface, as “tests performed with smaller forces may lead to erroneous conclusions.” It was also noted that “tests with standardized test feet are not expected to provide relevant information with respect to actual shoe-surface combinations.”

Studies evaluating the manual torque wrench test have also found relatively poor reproducibility between operators, which likely stems from the fact that the rotational speed must be controlled by the operator (and is almost never measured for verification purposes), and because any additional downward force applied by the operator can introduce error (it will typically increase the measured torque). In a study using an instrumented version of the device that could measure torque as a function of rotation angle throughout the entire test, it was found that the peak torque, which is the only value reported for this test, was reached at roughly 40 degrees of rotation (on average), which is likely much greater than the actual rotation of the foot during athletic movements. This study and others have also suggested that metrics other than peak torque, such as the rotational stiffness (the slope of the torque vs. rotation angle curve shortly after rotation begins but well before peak torque is achieved), may be more useful in understanding player-surface interaction and injury risk.

Although more sophisticated traction testing devices exist, they are not practical for daily transport and use. Since testing often needs to be conducted on actual fields, the portability of the equipment is important. While the current device is smaller and more portable than the larger biofidelic test devices, it still weighs over 100 lb and is cumbersome to operate and maneuver.

A lighter-weight device is currently being developed. It is designed to give the same results as the current rotational resistance test but uses the operator’s body weight to compress a calibrated spring and apply the 46 kg vertical load. It will improve portability and ease of use, but the same criticisms and shortcomings of the current device will still apply.

For lack of a better test, FIFA and other organizations have adopted the use of the BS EN 15301-1 “torque wrench test” to assess rotational resistance in artificial turf surfaces. The current acceptable range for rotational resistance tests on installed fields is 25-50 N·m (for the “FIFA Quality” designation, and the multi-sport consensus “OneTurf Concept” endorsed by FIFA, World Rugby, the Synthetic Turf Council, and others).

Considering the most recent evidence from NFL and NCAA data indicating that lower extremity injuries are more frequent and severe on artificial turf with sand/rubber infill than on natural turf, and that most or all of the artificial turf fields that were part of these studies would likely fall within the 25-50 N·m range when tested with the torque wrench tester, it begs the question, “what this test is really telling us about player-surface interaction and injury risk?” 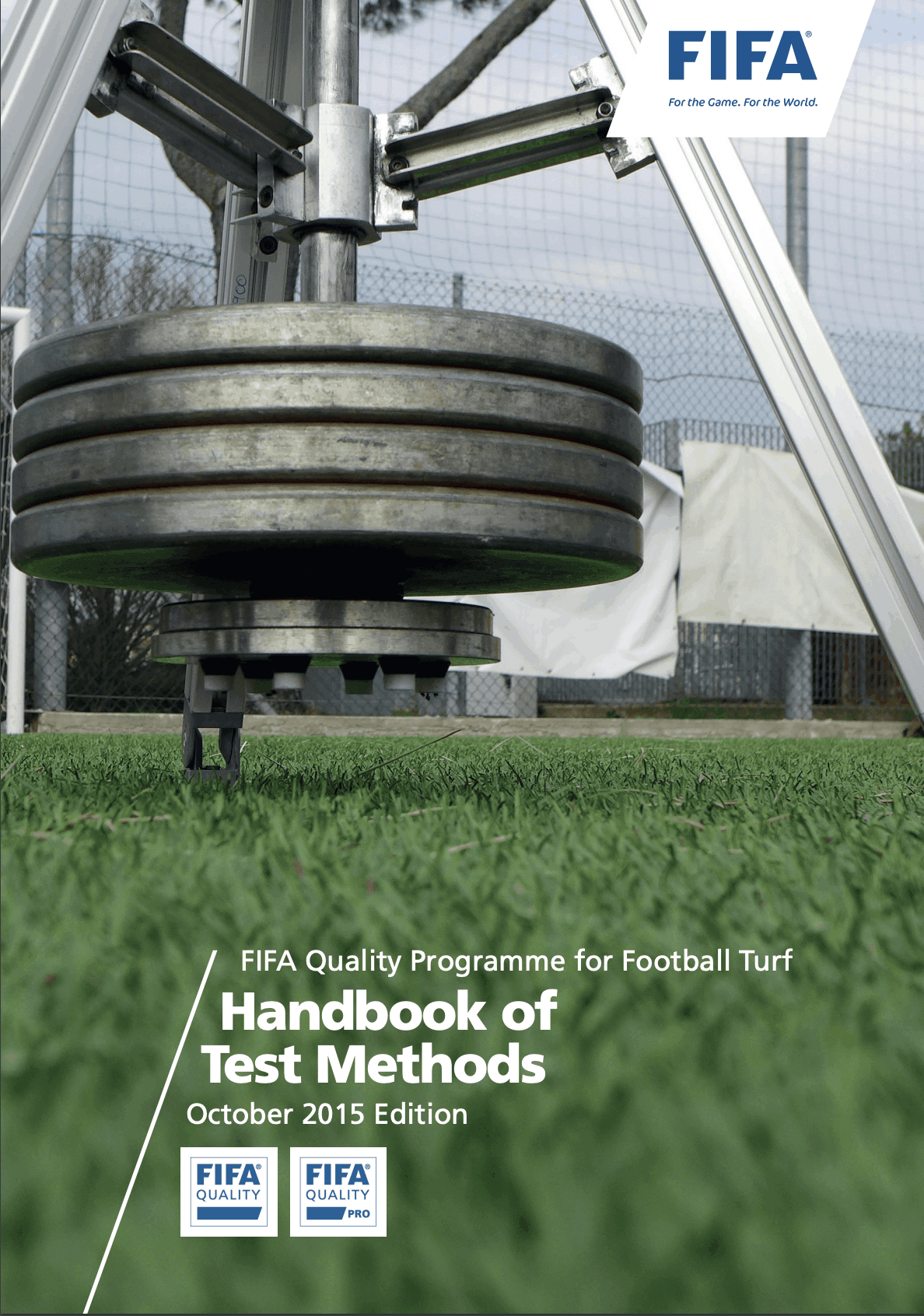