A Discussion of Rotational Resistance & Traction in Artificial Turf: Part 2 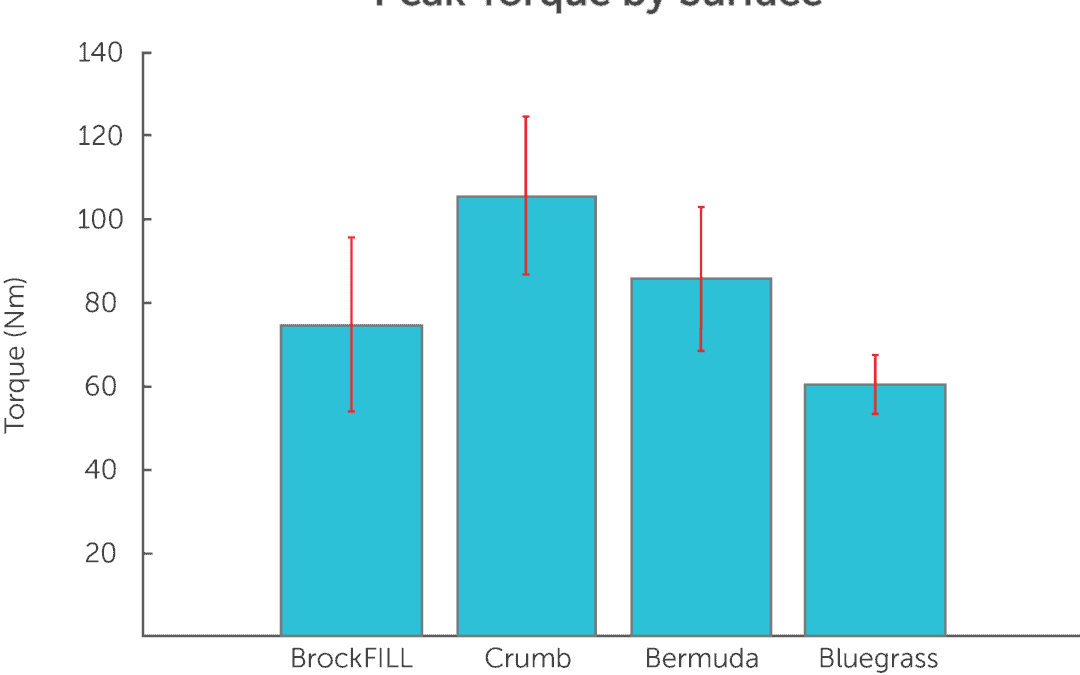 A number of sophisticated devices have been developed to measure rotational resistance and traction for artificial and natural grass playing surfaces.  These devices more closely mimic the forces and speeds typical of real athletes and can be used with actual athletic footwear, making them much better tools for studying and understanding player-surface interaction than the current rotational resistance device.

In a study comparing one such device, the PENNFOOT apparatus developed at Penn St. University, to the torque wrench tester on natural turf systems, the correlation between results from the two devices was poor. Though an improvement over earlier traction testing devices, the developers of PENNFOOT state that it “was not designed to simulate actual human foot movements,” as the cast aluminum foot is completely rigid and the types of foot motion are limited. Another device, called the BEAST (BioCore Elite Athlete Shoe-Surface Tester), was developed by Dr. Richard Kent, a professor of Mechanical and Aerospace Engineering, Biomedical Engineering and Emergency Medicine at the University of Virginia who works closely with the NFL on athlete safety issues. Using this device outfitted with a “general purpose” cleat pattern, professional football fields (game fields and practice fields) were tested for resistance to rotation.

The natural grass fields produced peak rotational torque values ranging from roughly 130 to 160 N·m (average of 145 N·m). Artificial turf surfaces with sand/rubber infill had an average peak torque of 197 N·m, which was essentially the maximum value the device was able to produce during the test. Roughly 80% of the synthetic surfaces tested did not “release” during rotation like the natural turf, which can divot or tear and thereby limit the forces experienced by the athlete’s lower body.

One criticism of this device is that, like the PENNFOOT apparatus, the test foot is rigid and does not move like a human foot in an athletic shoe. The most recent development in traction testing is the FLEX tester at the University of Tennessee Center for Athletic Field Safety. It can measure linear and rotational traction in natural and synthetic surfaces. Force plate data collected from real athletes by researchers in the University of Tennessee Department of Biomechanics were used to determine realistic operating parameters for the device.

Unlike the torque wrench test, the FLEX tester is able to simulate the forces and speeds of an athlete planting a foot and then rotating it. An anthropomorphic foot allows for actual athletic cleats to be tested in order to identify optimal footwear for a given surface. This device can be used to perform simulated athletic movements in order to gain a better understanding of the forces and torques experienced by the athlete’s body and to better predict whether or not a given shoe-surface combination will be safe for athletes.

In the process of developing BrockFILL™, the Brock team wanted to use the best available equipment to understand the rotational traction characteristics of synthetic turf systems that use BrockFILL as the performance infill layer. The rotational resistance of an artificial turf plot infilled with sand and BrockFILL was determined using the FLEX tester at the University of Tennessee.

Its performance was benchmarked against the rotational torques generated when testing high-quality natural sports turf and a conventional artificial turf system infilled with crumb rubber and sand. The results showed that the peak torque in the BrockFILL turf system was between that of a high-quality Kentucky bluegrass and Bermuda grass field. The same artificial turf, when tested with crumb rubber and sand infill, showed roughly 40% higher resistance to rotation than the BrockFILL system.

These results, using one of the most sophisticated and realistic traction testing devices available, show that the BrockFILL system can achieve performance on par with that of high-quality natural sports turf. They also support the previous findings of Kent and others that sand/rubber turf systems have higher rotational resistance than natural turf, which may help provide a mechanistic explanation for the results from recent studies of NFL and NCAA injury data that showed higher rates of lower-extremity injury on artificial turf systems.

With its ongoing support of university and independent laboratory research as well as its development of breakthrough turf products like BrockFILL, Brock continues to lead the artificial turf industry in the quest for athlete safety and performance.