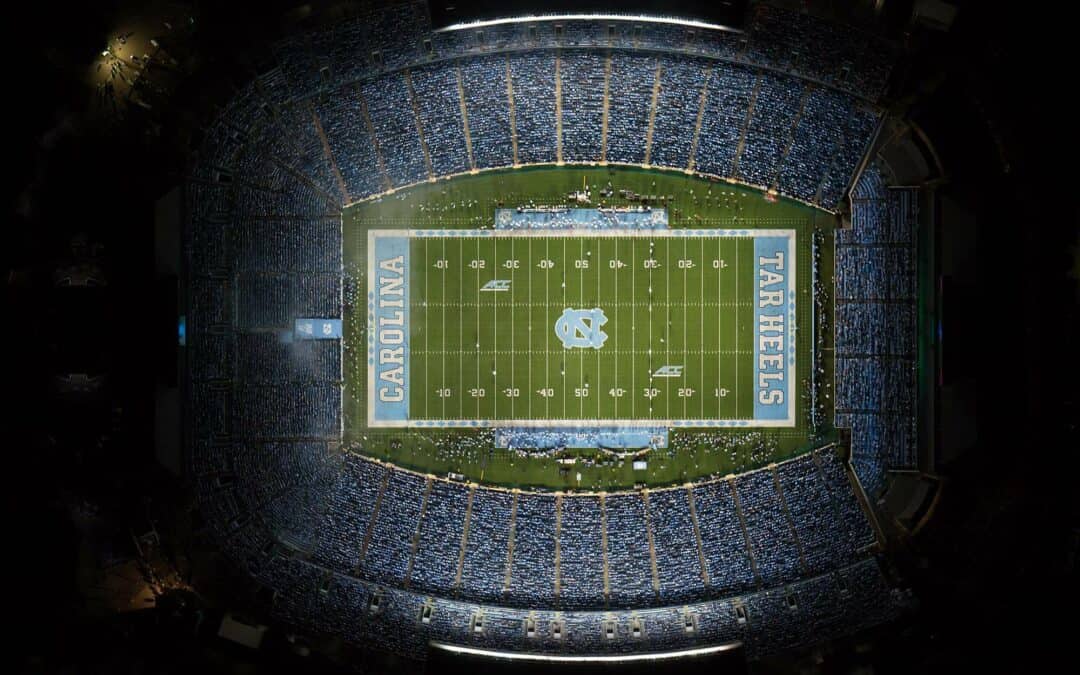 Excitement is mounting for the 2019 North Carolina Tar heels football season. The team has already sold out every home game, brought back Hall of Fame Head Coach Mack Brown, and rolled out substantial facility upgrades for its athletes – most notably, the newly renovated Kenan Stadium which features a Brock PowerBase/PRO artificial turf shock pad system to protect the athletes every time they run out of the locker room to 51,000 screaming fans.

What people might not know about the recent stadium upgrade is that it’s been part of a much larger, campus-wide initiative.  The university first met five years ago to discuss their master plan to create safe playing environments for all their student athletes, from intramural warriors to the elite athletes taking to the gridiron.

“We started an athletic facilities master plan in January of 2014. We spent about 13 months working on that plan and the anchor project that was identified through that process was an indoor practice facility and a new practice complex for the football program. That had several projects spawn from that decision. We built new practice fields for our soccer and lacrosse programs in advance of beginning construction on the football practice complex,” said Mike Bunting, who served as Associate Athletic Director for Facility Planning and Management at the time. “That’s when we started thinking about the field technology and what we need in athletic fields, ‘How are we best going to serve the folks that are going to use those fields?’ We made the decision that any synthetic fields we develop as part of the plan, we were going to share the use of those fields with campus recreation and the university.”

This planning allowed UNC to meet the growing demand for usable athletic spaces for its active student body. The heavy use from men’s and women’s soccer, lacrosse, and the plethora of intramural leagues made the decision to go with artificial turf a no brainer, according to Bunting. That’s where FitFields and Landscape Architect, Dan Dodd came into the picture.

The confidence the planning members at UNC had with FitFields came from Dodd’s own 20-years’ experience working with athletic facilities and his extensive knowledge building high-performance systems within the Carolinas.

“Dan is amazing. We have a really good relationship with him and have really enjoyed developing these projects with him. Dan is really in tune with all the latest and greatest in field technology, what all the synthetic turf manufacturers are doing and helping us compare and contrast those products. Of course, when you are talking about these fields and varsity athletics safety is a critical factor in the decision-making process,” said Bunting.  “The Brock Pad adds such a level of safety to what you’re doing, you want to do the absolute best you can do for the folks that are going to be using these fields and that’s the best technology that we are aware of on the market.”

The Brock Shock Pad system was a critical component of every field design. The 25-year warranty, its Cradle-to-Cradle Certifications for environmental impacts, and the ability to hit safety and performance measurements comparable to great natural grass fields were incredibly important factors, according to Dodd.

“Brock is one of the key elements of mimicking natural grass systems, which is the ultimate goal that we’re trying to get to with synthetic turf fields,” Dodd said. “To design a field that can come as close as possible to the real thing with the infill being the wild card on a variety of levels, but the Brock pad definitely gives us Gmax and HIC numbers that we can compare to natural grass fields, so it’s a very good base system for us to get us as close as we can.”

Once the planning and considerations for the campus fields took shape, the shovels kicked into the ground and work began on the first of the six fields on campus. Hooker fields, the intramural facilities on campus, were the first to take shape. Then followed the soccer/lacrosse practice facilities at Finley North. Both those projects utilized PowerBase/YSR. This system was engineered for a broader range of athletes and reduces the risk of injuries while keeping the playing surface firm and fast.

The fields at Finley North brought to light another one of the major advantages to a Brock PowerBase shock pad system – the drainage. The fields were completely submerged during Hurricane Florence last fall, but within 24 hours the water had drained from the flood plain and the soccer and lacrosse teams were able to get out and use the facilities.

The next projects in the plan were designed for the elite football players at UNC and incorporated Brock’s PowerBase/PRO line of artificial turf shock pads.  This system is denser and has a larger impact piston design to provide the necessary impact absorption for larger, more physical athletes. The outdoor practice facility was completed last fall and the indoor practice facility was completed this spring.

Those projects led up to the final major campus renovation, Kenan Stadium. The decision to move away from a natural grass surface in the stadium, which was one of the best in the nation, was not taken lightly.  The final considerations came down to allowing for more play on the field, the ability for it to be used by other sports – not just football, and the preferences from Coach Brown, according to Carrick.

“There’s pros and cons to both synthetic turf and natural grass and we love them both, we design both. We love the purity of natural grass and if we have the ability to do it, grow it, maintain it, and keep it at professional level quality, then it’s a great option for folks, but this university experiences a lot of pressures for other groups to use this field other than just for football,” Dodd said. “Having the flexibility to have lacrosse in the stadium and for other users to use it for practice routinely, I think that was one of their decisions for the conversion as well, so it wasn’t just for football, it is also for multi-use aspects of that field.”

Kenan Stadium was toured by the media just last week and Coach Brown highlighted some of the features brought to the field by including a Brock PowerBase/PRO system. The tour was told how the field had experienced a torrential downpour already and within minutes the field was dry because of its ability to drain water at 200 inches/hour. The guide also stated, “…the Brock Shock Pad, that’s what makes it operate almost just like grass.”

“It’s the latest best technology you can absolutely get in any kind of synthetic grass field,” Senior Associate Athletic Director Rick Steinbacher said. “The only system that tests with the same specifications as grass is the system that I just described to you that we put in out here.”

The Brock PowerBase/PRO shock pads were the key component in the artificial turf system at Kenan Stadium that allowed these achievements to take place, according to Carrick.

“I think at the end of the day the goal is to make any synthetic field play like a well-maintained natural grass field,” Carrick said. “With the Brock shock pad, we are allowed to change the infill a little bit, we can go with a little more sand, make it a little firmer while still keeping the impact levels low. We can tweak the field a little bit, we can have shorter fibers in the turf, just different infills to achieve different things. That’s what the pad allows us to do and still feel comfortable with the safety levels on the field.”

All these improvements to the field, combined with the locker rooms, medical technologies, nutrition centers, and more, show a heavy investment into the athletes and students at UNC. When asked at a press conference why this was so important, Coach Brown responded, “(the players) need to know that they are important. They need to know that there is change coming.”