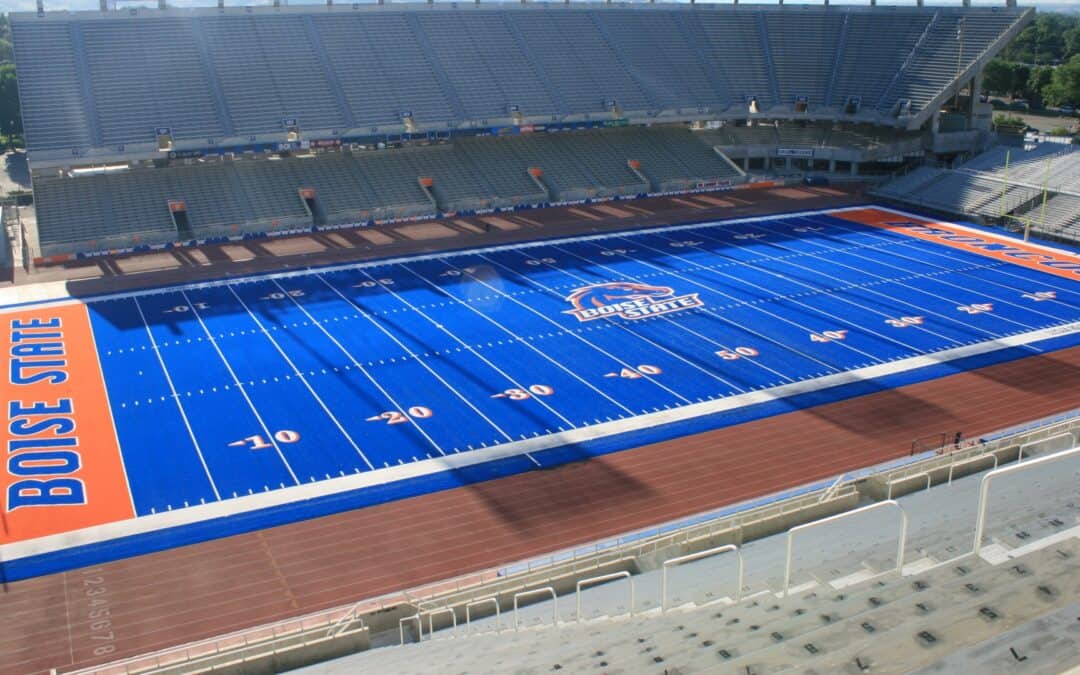 The updated turf marks another milestone for the industry – Brock’s artificial turf shock pads are the only pre-fabricated pads on the market to have two turf replacements while remaining in great condition.  The shock pad system has already outlasted it’s original 10-year warranty and with the expectation of a full turf life out of the new replacement turf it may double.

“It’s way brighter, looks way cleaner and it’s beautiful,” said Boise State Head Football coach Bryan Harsin in the Idaho Press. “It looks much better now, and we’ve been running and working out on it already and the players love it. It’s got good grip; it has more bounce and it’s not as hard as the other turf. You can really tell a difference”

The type of pad that is installed at this field is called Performance Base, which is actually the first type of pad Brock USA ever produced for widespread use. Since the shock pad install in 2008 at Boise State, Performance base has evolved into PowerBase and then evolved again to split off into PowerBase/Pro and PowerBase/YSR. Even though Performance Base is now out of production, it is still holding up just as well today in 2019, as it was eleven years ago.

Boise State’s field at Albertsons Stadium, since 2008, has not just played host to football games, but also soccer games, youth camps, fairs and festivals, and even huge concerts that fill the stadium to maximum capacity. Sitting right beneath the turf and supporting all that weight is the Brock Shock Pad system. The pads are designed to survive wear and tear from sports, but also all kinds of other activities and events. In fact, on July 20th, 2019, the pads will get to prove themselves once again as Garth Brooks comes to play a sold out at show at Albertsons Stadium.

The field was unveiled to the public on Wednesday, May 5th, 2019. Fans got a chance to check out the new turf, toss a football around, and even buy a piece of the old turf if they wanted for $39.99 a piece. In the past, Boise State has sold or given away their turf for reuse, but this turf was too worn to re-sell.

The new turf will officially debut on Sept. 6 when the Broncos host Marshall in the home opener at 7 p.m.