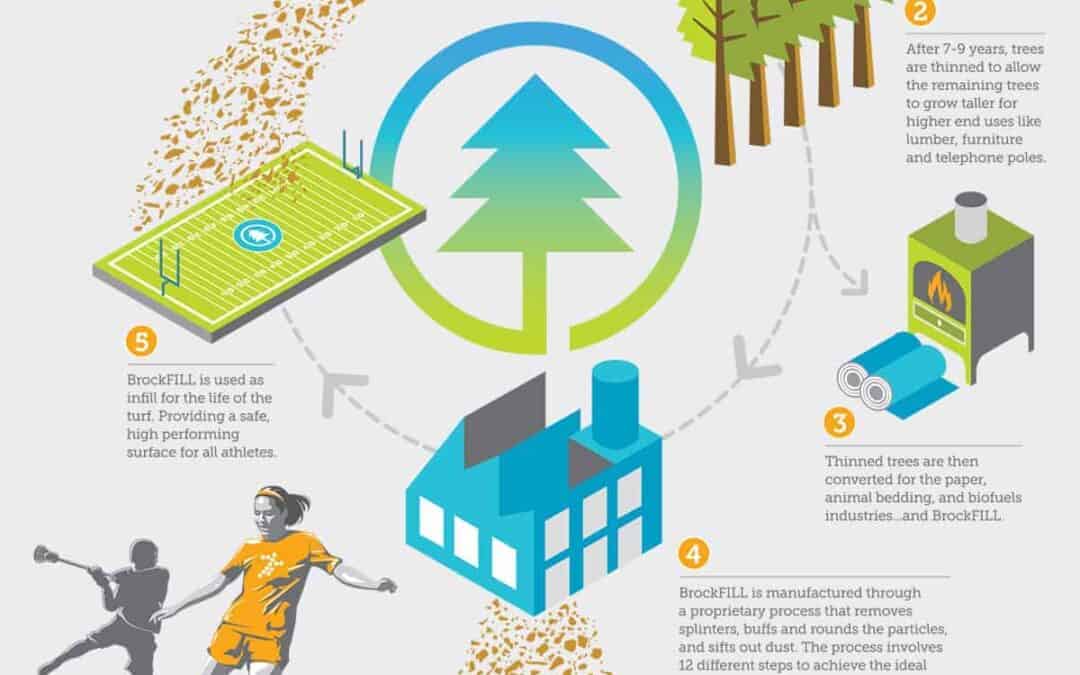 Brock USA, the leading manufacturer of shock pads for artificial turf fields, has released the aptly named “BrockFILL” – the first affordable and durable organic replacement for crumb rubber. In late 2014 Brock USA began assembling a team of researchers from universities, sports testing labs, PhD scientists, engineers, horticulturists, and human test subjects.  For three years the team worked to identify, test, and validate natural infill materials that could meet a long list of objectives. One material not only met, but exceeded the team’s expectations.

For those unfamiliar with artificial turf, a typical system is comprised of four key components: the base, a quality shock pad – for impact absorption and safety, the turf itself, and the infill. When construction begins the contractor grades a stone base which includes a drainage system, the shock pad is installed, and then the turf gets rolled out. They sew in the lines, hash marks, logos, and any other design elements and then the infill gets brushed into the turf fibers. Infill holds the turf fibers up, provides the traction, and some cushioning for the field. Traditionally, the infill has consisted of crumb rubber and sand, but recently attempts at alternatives have included materials such as cork, coconut husks, coated sand, walnut shells, and even olive pits.

“The goals of developing Brock’s infill were huge”, says Steve Keyser, COO and Director of Engineering at Brock USA. “We wanted to tackle all of the safety and performance issues, but it also needed to be economically viable and not add cost to the project.”

Ultimately, one particular type of organic material passed the test. It turned out to be one of the most widely used and durable materials in mankind’s history: wood. But making wood work in the artificial turf field application was no easy task.

“Once we identified the southern yellow pine as the ideal material for durability, safety, and sustainability, there were still concerns”, says Keyser. “Will it burn, will it float, can existing infill equipment be used, will it splinter, plus a litany of other failure mechanisms were identified. Which is main reason it took three years to develop, not only the material, but then another year for the process to manufacture it and solve all those problems. We simply would not launch a material that didn’t satisfy ALL of the requirements, but in the end, it did.”

BrockFILL provides greater traction, less splash, a cooler field, better ball bounce, and a more natural feel to the field. The wood particles have performed incredibly well in regards to durability as well. After 20,000 Lisport cycles, the standard wear test for artificial turf simulating 8-10 years of play, the infill lost very little mass, became polished, and even less abrasive. BrockFILL also resists mold and bacteria growth because of its nine-stage manufacturing process, without using chemical processes. The most surprising aspect was how resistant the material is to catching fire. The particles are simply too small to create enough energy for continued combustion.

Wood has been used in playground for decades and is accepted by the Federal Consumer Products Safety Commission as a preferred material for fall zones, and it cools down the excessive field temperatures caused by SBR rubber. Using an organic, abundantly grown product from the USA also provides the turf industry a mass market product that competes with crumb rubber on price, unlike small, niche materials like cork or coconut that are made overseas and add significant cost to the project.

Environmentally, it’s a win-win for the industry. BrockFILL is sourced and made in the USA from sustainable tree farming of forests that are grown for the paper, biofuels and animal markets, there is zero waste in the manufacturing process, and no disposal hazards at the end of the field’s life. BrockFILL has already been approved by Los Angele’s Office of Environmental Health and Safety (OEHS) as a viable replacement for crumb rubber in artificial turf systems.

The myth that rubber infill alone is enough to protect athletes and children from impact injuries is also crumbling. For nearly two decades Brock USA has proven the necessity of shock pads to be included in the systems to hit industry approved safety standards, including the newest ASTM standard for head injury. Yet fields are still being built directly over stone with crumb rubber as the only line of defense because it cuts costs.  The release of BrockFILL removes the excuse of cost in creating the safest playing environment.

Dan Sawyer, CEO of Brock USA, is optimistic, “Traditional artificial turf has been a great solution for so many clients, but times are changing. We know more about athlete safety, and our planet needs sustainable solutions that are affordable. The system of a rubber infilled carpet laid directly over stone was a good step forward 25 years ago, but innovation and improved care for our athletes must continue. Turf fields of the future need a system that is cooler, has a responsible end of life solution, and elevates the safety levels to those of natural grass.”