Artificial Turf and Concussions: Learning from the past.

When the Houston Astros decided to install an artificial turf field in the Astrodome in 1965 people were excited. That excitement slowly became marred by controversies surrounding player injuries and the unforgiving, hard surfaces. These early fields gave way to Gen 2 and Gen 3 fields that began using longer pile heights and rubber and sand infills to simulate the dirt between blades of grass. Although these improvements were drastic and helped to lessen the injuries suffered from athletes, it wasn’t until underlayment technology evolved that artificial turf fields began to truly mimic natural grass performance metrics. Who was the company to pioneer this technology? Brock.

Brock was studying the dangers of concussions on turf-over-stone fields long before the media grabbed hold of the issue. The Brock shock pads have helped artificial turf fields consistently produce low Gmax levels, even as the infills become worn and compacted. No matter what infill is used in a field, it inevitably will degrade and lose its impact absorbing properties. For this reason, it is critical to install a Brock shock pad under every field. Your athlete’s brains are too precious to risk impact concussions with the turf.

UNDERSTANDING IMPACTS TO THE BRAIN VIDEO

“People think ‘concussion’ and they immediately picture in their mind one guy hitting another and his head snapping back,” said Atlanta-area attorney Robert Blackmon, who has been involved either as a lawyer or consultant in four concussion-related cases. “That’s not always the case. You don’t have to hit another person, believe me, to (suffer) a concussion. (Playing) surfaces figure into the equation, too. I don’t know if it’s the ‘dirty little concussion secret’ or not. But it’s true.”

The playing surface was pulled into the concussion conversation just recently, despite studies showing the frequency of impact to turf head injuries being conducted for years. 1 in 5 concussions is caused by a head to surface impact. That means, according to the CDC, over 800,000 concussions may occur from a player’s head hitting the turf. That percentage of concussions resulting from a head to surface impact is even higher among children under the age of nine. As a child grows their head is dramatically larger in proportion to their body than an adult’s. At age 6 a child’s head is already at 90% of its full adult size, while their bodies are only 50%. This proportional disparity, combined with developing neck musculature, increases the risk of concussions for children.

The differences in how the turf responds to both adult athletes and children is why Brock has developed the Brock PowerBase YSR and PowerBase Pro products. These shock pads are engineered for each body type and offer the protection that can help lessen the frequency and severity of concussions. 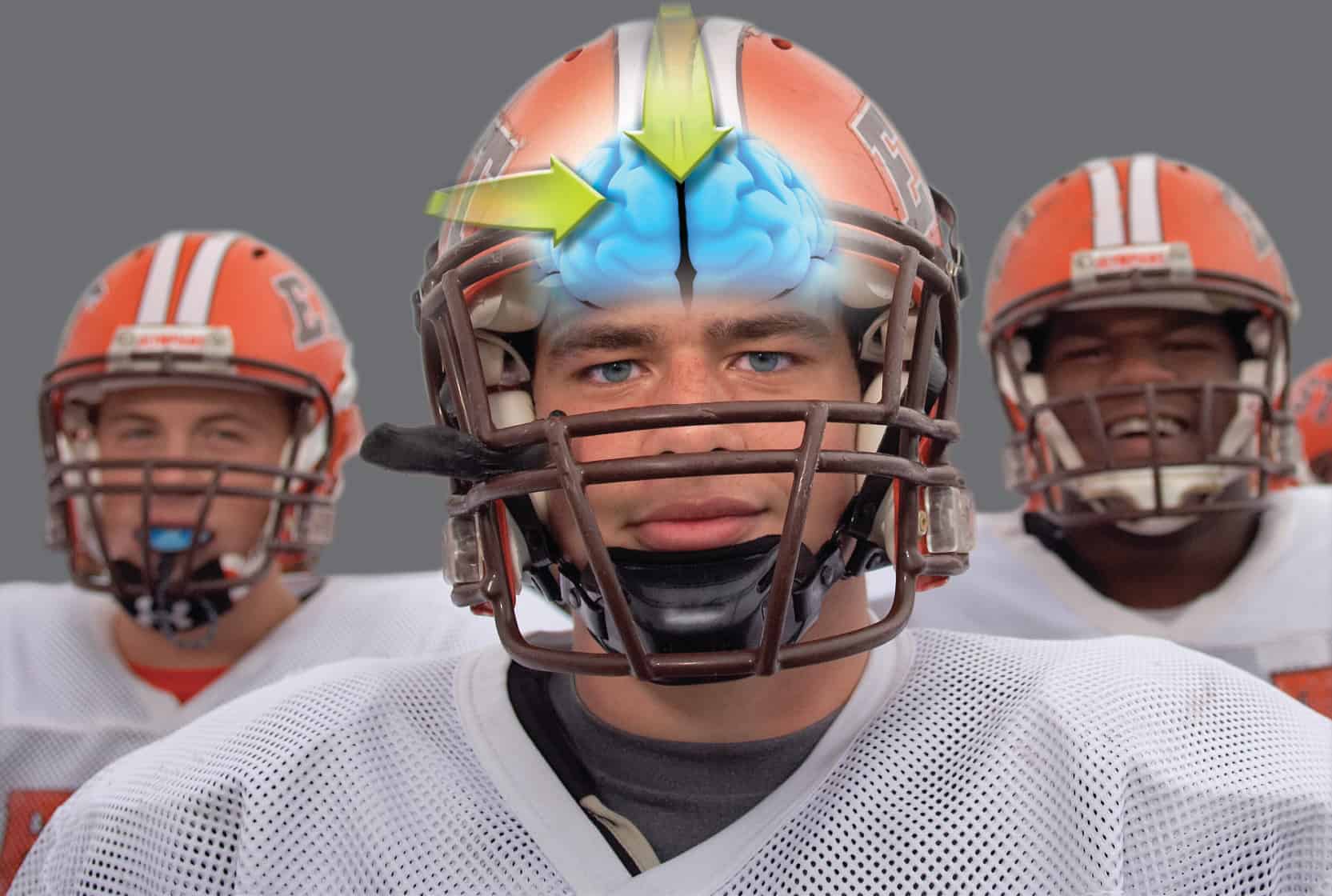 Artificial surfaces should receive the same attention and scrutiny as football helmets. Despite one in five high school sports concussions being caused by surface impacts, and one in four concussions in youth soccer and football, we have no national conversation on the technology underneath an athlete’s feet.– Concussion Legacy Foundation more durable fibers

Dr. Omalu: the science of Concussions and CTE

In 2002, during his routine civil service work as a medical examiner in Pittsburgh, Pennsylvania, Omalu performed an autopsy on Mike Webster, Pittsburgh Steelers center and NFL legend. Webster had died suddenly and unexpectedly, following years of struggling with cognitive and intellectual impairment, destitution, mood disorders, depression, drug abuse, and suicide attempts. Although Webster’s brain looked normal at autopsy, Omalu sensed something wasn’t right, and persisted by conducting independent and self-financed sophisticated tissue analyses of Webster’s brain. He eventually identified microscopic findings in Webster’s brain that led to his discovery of a variant of a disease previously found in boxers, and which he gave the name chronic traumatic encephalopathy (CTE). Omalu’s finding would change his life forever and put him in the crosshairs of one of the most powerful corporations in America: the National Football League. Over the next six years, Omalu found evidence of CTE in retired NFL players Justin Strzelczyk, Terry Long, Andre Waters, and Tom McHale. The disease has since been discovered in nearly 90 NFL players including legendary safety Dave Deurson and hall of famer Junior Seau. Currently, CTE is only diagnosable through autopsy, when brain tissue can be analyzed.

Omalu has also found CTE outside of professional athletes. In 2007, and again in 2010, he discovered it in the brains of Vietnam and Iraq war veterans who suffered from post traumatic stress disorder (PTSD), one of whom had committed suicide. Omalu and other doctors across a variety of specialties continue to work on and expand our understanding of this debilitating and life-threatening disease. Since discovering and diagnosing the first known cases of CTE, Omalu has devoted his life to trying to help those families and individuals affected. Omalu’s work has revolutionized our understanding and treatment of all types of traumatic brain injuries with applications and translations in public health management, public policy, and sports administration policy.