Since when did “going green” become a tourist attraction?

For New Yorkers, this isn’t a new concept. With the High Line project in 09, annual philharmonic concerts in the park, the Met rooftop garden, and many more environmental projects over the years, it came to no surprise when Lincoln Center transformed their infamous concrete courtyard into an eco-friendly artificial turf park.

The desire, nay, need to add greenery in the concrete jungle is common amongst city dwellers, but as one New Yorker understands, some places are sacred and untouchable. Where one project on the Upper East Side is adopted, another in the Lower East Side infringes on a random historical sidewalk that Lennon and Yoko once sat on. As Johnny Carson once said, “Anytime four New Yorkers get into a cab together without arguing, a bank robbery has just taken place.” -Funny man that Carson was. In a city of constant change and development, how have residents of the famous boroughs embraced the new revival of the beloved plaza? -With arms open and a hidden New York smile.

Lincoln Center for the Performing Arts, or Lincoln Center, is a 16-acre complex on the Upper West Side of Manhattan. Out of the thirty indoor and outdoor facilities, it is most notably known for housing the New York City Ballet, the Metropolitan Opera, The New York Philharmonic, and the Julliard School of Music. With famous performers as Anna Pavlova, Placido Domingo, and Friedrick “Fritz” Freisler, it is no wonder it welcomes 5 million visitors per year. 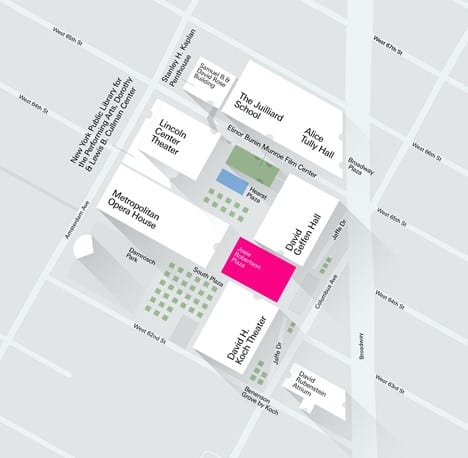 In 2020 the icon plaza looked like 1939 abandoned McKittrick Hotel home of the award-winning theatrical, Sleep No More. If you can imagine a ghost town with a lonely tumbleweed rolling down empty streets, this was the Lincoln Center. As the world started to reopen and the musicians dusted off their instrumental appendages, the Center wanted to ensure the same feeling and emotions it has always given its visitors. : “One of my favorite times at Lincoln Center, actually, is just before curtain comes up and just after it comes down on campus,” says Henry Timms, Lincoln Center’s president. “And you just have this moment where the campus is completely full of people. And one of the many, many things, you know, we miss at Lincoln Center, is that feeling of community, that sense of connection.

In the effort to rebuild that sought after community-experience, McArthur Genius grantee Mimi Lien was commissioned to design a space that invited New Yorkers to relax in the open air whilst occasionally enjoying live performances without needing to purchase a seat amongst the houses. Mimi turned the nearly 20,000 square foot space into an eco-friendly environment known as “The Green.”

“The GREEN” Mimi shares, will be the material focal point of Lincoln Center’s “Restart Stages” initiative, which opened to the public in May this year as a major outdoor performing arts center featuring outdoor performances and a rehearsal space on the Upper West Side between West 62nd and 65th.

With such a unique design, how was this idea born? Did it come in a dream as one would think by merely looking upon it? “When invited to consider how the physical space of Josie Robertson Plaza could be re-envisioned to be a more inclusive and inviting environment, I immediately thought that by changing the ground surface from hard paving stones with no seating to a material like grass, suddenly anyone would be able to sit anywhere,” said Mimi Lien. 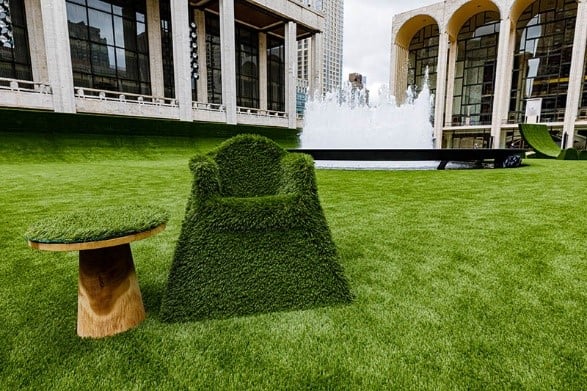 The Green features 100% recyclable, biobased SYNLawn® artificial grass made in the USA from renewable soybean oil entirely sourced from US farmers. As SYNLawn says, “it is literally the most realistic artificial turf in the industry.” For the safety aspect of the space, because we all know that carpet over concrete can still hurt if you fall, a playful shock pad was layered beneath the artificial grass. The Brock USA PowerBASE PLAY is a shock pad specifically designed for recreational play at all ages absorbing shock from any slip and trip that may happen. This pad, too, is 100% recycle, cradle-to-cradle, adding to the fully environment-focus design.

With no shortage in safety and design, one would hope that residents embraced this project, and – New Yorkers love it! Aside from the 5.0-star google review with a shared comment, “perfect place for kids and parents, beautiful green land,” it is Twitter that blew up with liked comments and posts: 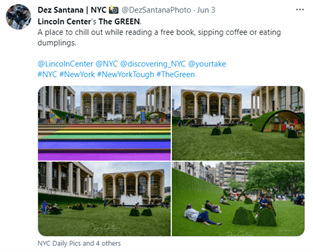 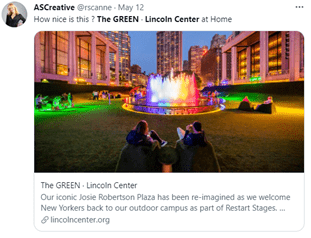 Twitter is jumping for joy, and so are we! This isn’t just an art installation; this is a green movement supported by the masses and encouraged to continue.

Eco-art is a global movement educating viewers on ecological status throughout the world. From a simple daisy chalked on a garbage can to remodeling the beloved Lincoln Center -green is art. In an article on Dutch eco-artist Daan Roosegaarde, Carol Becker (author) writes,

In a time when we bemoan the impact of humans on the natural world, Roosegaarde’s interventions literally illuminate both the rural and the urban landscape. Many of them exemplify sustainable design, seeking not only to reduce the amount of energy used but also to generate their own energy. He imagines how, like jellyfish, they might light themselves—thus “doing more, instead of less.¹

Roosegarrde is just one of many artists turned climate activists who use their work as awareness platforms, bringing that energy to commonly overlooked issues.² Art: What was once a connection with the eye of the beholder now has a purpose for change.

The Lincoln Center’s Josie Robert Plaza has more than a  facelift, as one may see across the park -it has a place for memories, stories, experiences, emotions, and relationships. New Yorkers look back at their time(s) spent in the Center, and those are things they think of -stories, memories, etc. They look at the revived space and envision a new blank canvas awaiting experience. The city has accepted this change; the only question and desire on minds is –will it return in 2022?