To design and install an artificial turf field successfully it’s important to understand how different materials behave under temperature and climatic changes. Many companies have varying installation practices so we studied the forces at work in artificial turf, and how those forces translate to edge details and the interface with a shock pad (if used).

A 6×6 sample of artificial turf was heated in an oven and monitored using thermocouples until it reached a temperature of 180 degrees F (commonly seen turf temperature during installation on a sunny summer day). It was then placed on a Mark 10 test stand, with one edge constrained and the other connected to a load cell. The contraction force was measured as the sample cooled to 71 degrees, reaching .125 pounds. Since the turf is a continuous carpet, the tension on each little 6×6 segment of turf across the field is additive, so the tension at the edge of the field can reach more than 50 pounds per foot of width! 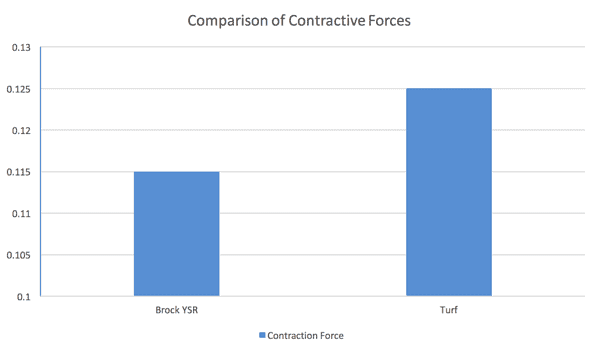 The turf backing can easily take that amount of tension, but the edge of the turf needs to be fastened securely to the nailer to make sure it doesn’t pull away. When a shock pad is installed under the turf, it also contracts as summer turns to winter, but the temperature changes are less extreme than on the turf surface, and the contraction forces measured in the lab are about 8% less than that of the turf. If the shock pad is a panel system, the contraction forces are not additive across the field, since each panel moves independently and thermal expansion/contraction is considered in the panel edge design. So the contraction of the shock pad (in this case Brock PowerBase YSR) does not translate to tension on the turf.

The coefficient of friction was also measured between the turf and the shock pad to see if there was any interaction between them during thermal expansion or contraction. For a typical infilled turf system (2” turf with 65% sand, 35% rubber), the frictional force holding the turf to the shock pad is about 5.5 pounds over a one square foot area, and far less than the tensile force the turf exerts on the edge nailer. So in this study, it was demonstrated that the turf and shock pad move independently during seasonal thermal expansion and contraction.