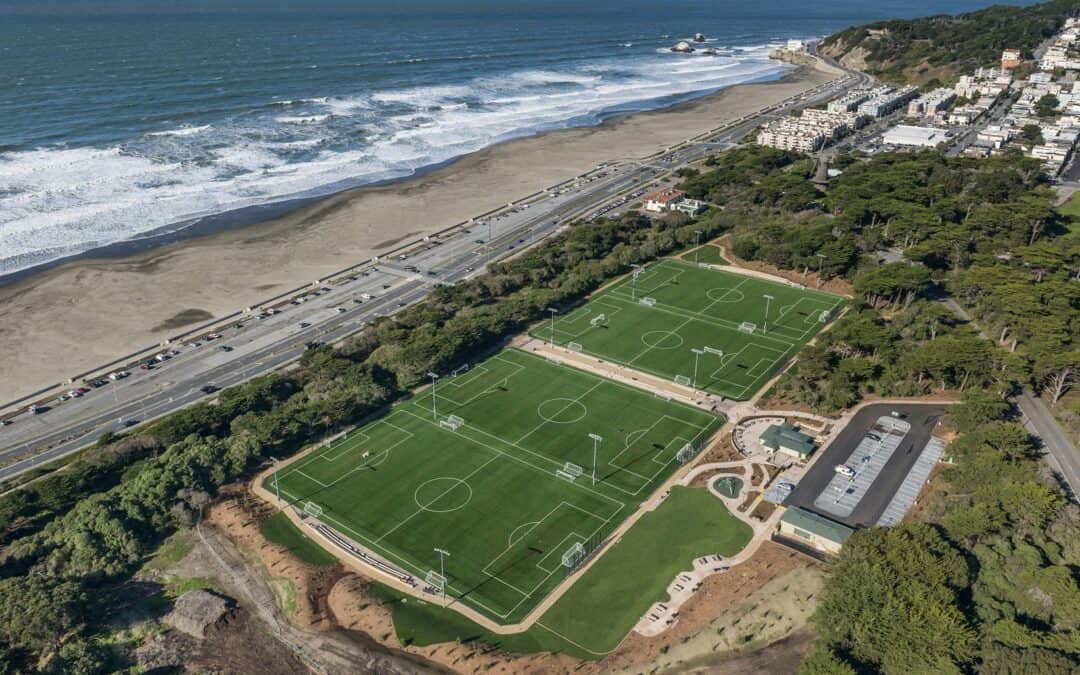 In 2002, members of the San Francisco Parks and Recreation Department kicked off a project with Verde Design, Inc. to install artificial turf in parks and athletic fields throughout the city and county. Although it quickly became clear that artificial turf provided numerous benefits over natural grass, many concerns arose among the city’s citizens. These concerns caused SFPRD Project Manager, Dan Mauer, to investigate ways to improve artificial turf fields. According to Mauer, the team wanted to “achieve the benefits of synthetic turf while addressing the concerns brought forth regarding public safety and the environment.”

Mauer recalls that the approach from Brock convinced him and his team to go with their product. “When Brock came forward, they not only tied things to prior success and pointed out its (PowerBase/YSR) benefits, but also expressed a desire to engage with the city to improve its parks and fields.” Thus in 2008, the SFPRD decided to install artificial turf over Brock shock pads.

Another factor influencing the decision to choose Brock over its competitors was the tested reliability of its product. “The turf industry is constantly evolving, and we didn’t want to be the first out of the chute supplying a new product and having it fail over time,” Mauer states. “Durability and longevity were important to us.”

Environmental impact levels played a major role in selecting a company to provide shock pads. “It was important that we find a product that could recycle at the end of its useful life,” Mauer notes. The department conducted thorough research on different manufacturers and products; and concluded that Brock was the best choice.

“A lot of companies out there said they would recycle their product, but in reality, after a few stages it will end up in a landfill. Brock’s selling point was that they could take their product, recycle it back to a virgin material, and then reproduce the same product again for reuse.”

Brock is Cradle to Cradle certified, meaning it can be completely recycled once it is no longer useful.

When they decided to install artificial turf in parks and fields in San Francisco, Mauer and his associates wanted to ensure it offered all of the benefits of natural grass. According to Mauer, a major benefit of the combination of shock pads and artificial turf is that together, they create a consistent surface. “Brock doesn’t change the softness of the field,” he states. “It maintains a level of playability and consistency over time so those using the fields can anticipate the same conditions.”

Ensuring the safety of fields and parks was another top priority for the department. “We want to make sure the products we are putting out there are safe and meet the highest standards that are available in the industry right now.” Installing Brock shock pads under artificial turf fields offered an ideal way to minimize impact-related injury.

Currently, there are over 220 park facilities in the city of San Francisco and a limited number of operation and maintenance staff, which makes the upkeep of natural grass difficult. Furthermore, natural grass fields in San Francisco are subject to issues like irrigation problems, gophers, pot holes, and use by individuals for unintended purposes, which causes the fields to degrade rapidly. Natural grass fields have to be closed for two-four months annually to allow for regrowth, whereas synthetic turf enables year-round use.

After first-hand experience, Mauer would confidently recommend Brock to other potential consumers.

“THE EXPERIENCE I HAVE WITH BROCK IS THAT ITS PRODUCTS PERFORMED AS PROMISED OVER TIME AND AS TIME GOES ON, I’M SEEING OTHER FACILITIES MEETING THE SAME REQUIREMENTS. IT HAS TREMENDOUS CUSTOMER SERVICE ON THE FRONT END AND DURING CONSTRUCTION, AND IT’S A PRODUCT THAT CAN BE RECYCLED AT THE END OF THE DAY, WHICH IS EXTREMELY IMPORTANT FOR THE FOLKS OF SAN FRANCISCO,”